I have always been torn where the 1980s version of Red Sonja is concerned. I am a big Frank Thorne fan, but my earliest experiences with Red Sonja are from Savage Sword of Conan, which (to the best of my knowledge) Thorne rarely worked on directly* My first real comic book experience with the character was through the mini-series She-Devil with a Sword: Red Sonja, which led to the regular comic book.

From a logical level, the new Red Sonja attire is certainly more adventure-worthy than the chain mail bikini. Also Sonja is more athletic looking than in Thorne's work. From a feminist perspective, Sonja is less of a sex-pot, but if I remember correctly, they play with a potential lesbian bent to her nature — this is not really a problem for me, save that Sonja accepts no man who cannot best her, not because she is not interested.

One of the best parts about the 1980s Sonja is having Christy Marx writing. Ms. Marx wrote for numerous cartoons and comics (including Sisterhood of Steel, Conan the Barbarian, and Elfquest). I first came accross Marx's work in the PC DOS game Conquest of Camelot, which had a lot of mythological depth and a good story. Marx was very talented and was key to reviving the character for me.

All that being said, I am going to jump off the fence. I like the 1980s Sonja. She is different than the 1970s version, and has complexities of her own. I remember there being some really awesome covers, one of my favorites was:

* The Wizard and Red Sonja Show was, I believe, originally published by Eros Comics, and reprinted in SSoC.
Posted by Darius Whiteplume at 11:26 AM No comments:

Not sure if anyone has posted this already. Quite an impressive costume, imho.

Email ThisBlogThis!Share to TwitterShare to FacebookShare to Pinterest
Labels: Cosplay

Just so we have things clear.

I'd like to keep this blog as civil as possible. A comment on the previous post irked me, but I try not to feed the trolls, then I began thinking of how inappropriate the comment was. It may have been in jest, I don't know. The problem is, with text it is often difficult to discern meaning by anything but the words typed.

That being said, I don't want to see any more comments that can even be construed as abusive. This is a fan blog, run by fans. I, however, own it. I am going to keep things the way they are for now, but if I need to start moderating comments or limiting comments to followers I will not hesitate, and I can boot offenders.

Lets keep it clean, and keep it considerate. If you can't say something nice, then say it on 4chan. ;-)
Posted by Darius Whiteplume at 4:34 PM No comments:

The Many Faces of Sonja

Red Sonja issue 50 has come and gone without a mention here, so I figured I might as well be the one to mention the Sonja-liciousness of Dynamite's landmark 50th issue. There were four covers for this issue, and I wanted them all. Unfortunately, I was only able to pick up the Joe Jusko and Joe Linsner covers (I had really hoped to get the Art Adams cover, too).

There were six stories in the thick issue (it was a lot like an issue of Dynamite's Savage Tales, except all the stories were Sonja-centeric). Three of the stories are brand new, one is really old (a Frank Thorne reprint) and two were from a previous Dynamite Sonja series.

The first story, The Cloud Tiger, was illustrated by Pablo Marcos (this wasn't the first time he's taken a stab at Sonja). Methinks Pablo needs to spend some time studying anatomy. Women's anatomy, specifically. To misquote Steven Tyler, "Lady looks like a dude." Thumbs down.

The second story, Here there Be Wolves, was illustrated by Joyce Chin, and Joyce took a much more classic approach to drawing Sonja. The horse, the flowing red hair - it all borrows heavily from Franke Thorne's Sonja (though she's a cup-size or two bigger). Thumbs up.

I was sure that the issue's third story, The Frost Giant's Curse, was going to be a rip-off of the Conan Frost Giant's Daughter story. Fortunately, other than the words "Frost Giant," there wasn't much retreaded material. The story was well-illustrated by Johnny Desjardins. Thumbs up.

This isn't the first time Dynamite has included an old Marvel Red Sonja story in one of their comics. It's fun to see how Sonja has evolved over the years (sorry, but I'll take most of the newer renditions of Sonja over Thorne's, any day). Still, the walk down memory lane deserves a thumbs up.

I had some serious Tolkien flashbacks when reading the fifth story, The Hands of Fate. Noah Salonga's ghost kings were right out of the Lord of the Rings (from the Paths of the Dead). And trolls. All we needed was some orcs and a couple of hobbits. Thumbs up.

The last story of the issue, Revenge is a Bitch, is short, but very well illustrated by Ron Adrian. Sonja is strong, fierce, and angry, but still unquestionably female (something other artists forget in their efforts to make Sonja the uber-butch warrior queen). Another thumbs up.

And if anyone cares, I also have a couple of thoughts on the third installments of Dynamite's Red Sonja Annual. Dan Brereton is da' man. And Adriano Batista ain't half bad, either.
Posted by Bartski at 2:47 AM 4 comments: 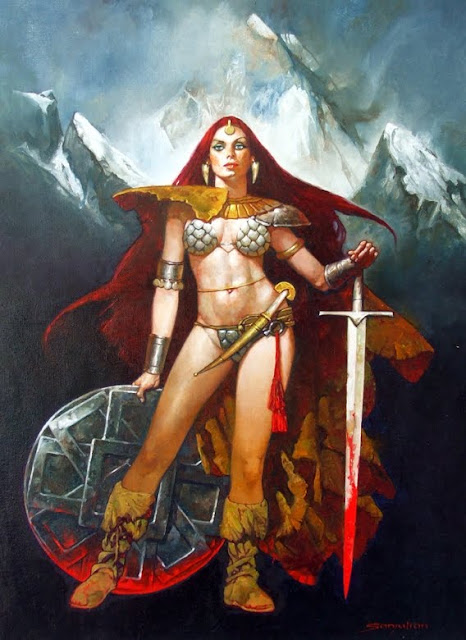 I'd seen his work on various magazine covers throughout the 1970's I always loved his figure work and his backgrounds are as mysterious and cloudy just like Frank Frazetta's.  But this RED SONJA has a very unique look and feel to it.  I've never seen an original depiction that I liked very much.  When I think of Red Sonja I'm thinking Frank Thorne , Buscema , Maroto.  You know a particular LOOK.  This is the first time I'm seeing this and I think it's classic and beautiful.
Posted by Mike D. at 8:53 PM 2 comments:

Sonja with a little less up top

I was out wandering around the interwebs today, looking for information on a Richard Corben comic series that I had somehow missed last year when I stumbled across some Edgar Tadeo sketches of Sonja that I don't think I've seen here before.

The web site that I found the first image on made this comment:

The She-Devil with a Sword never looked better than in this drawing by Ed Tadeo. I like the fact that in designing Sonja's figure, Ed opted to depict her as lean and muscular instead of preternaturally busty. Nice work.

As much as I love the gigantic breasticles, I have to agree...
Posted by Bartski at 1:32 AM 3 comments:

The Queen's not quite dead yet...

Queen Sonja #7 came out last week. And, as of this issue, no real attempt to explain how Sonja became queen has yet been made (that I've noticed, anyway). Or to explain exactly why she's fighting the Armies of Darkness.

Nevertheless, the cover by Lucio Parrillo was again amazing.

Another comic title that came out last week was Image comics's Dust Wars with an equally amazing cover by Paolo Parente (you should seek out any other comic he's worked on - he's amazing).

And that got me thinking...


What other artists would I like to see do a Sonja cover? I think Paolo would be right up at the top of my list.
Posted by Bartski at 3:08 AM No comments: