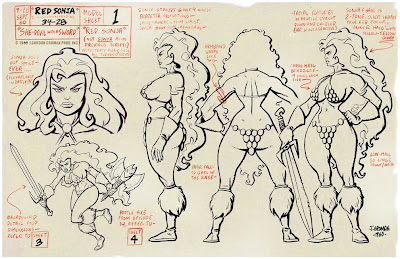 Is anyone aware of this? There was either going to be a cartoon or the pitch is out there yet not picked up? Anyone got any news about it? Drop us a line. Character sheet by James Groman...1960?...check out his blog ( James Groman )

Today is Darwyn Cooke's birthday.  Here are some of his Red Sonjas to celebrate. 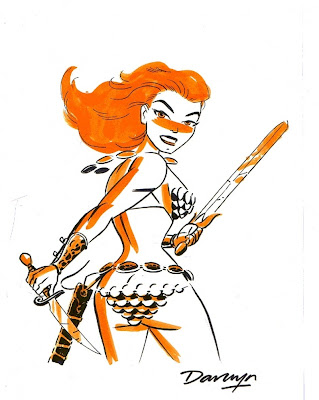 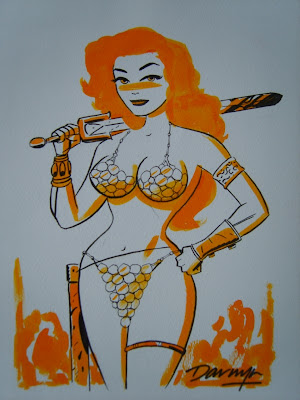 Posted by Timothy S. Brannan at 1:48 PM No comments:

Pointed out to me at Calvin's Canadian Cave of Cool.  The art of Tom Bancroft. 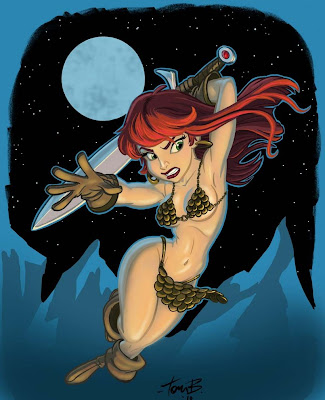 Thanks Calvin!
Posted by Timothy S. Brannan at 8:27 PM No comments: 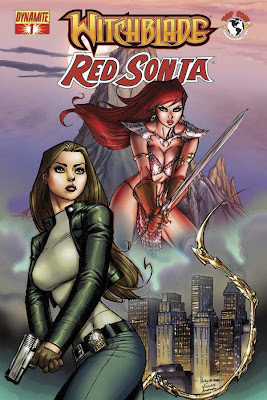 Join Dynamite Entertainment and Top Cow Productions as they bring two of comics most celebrated heroines together in one terrifying tale of loss and redemption with Witchblade/Red Sonja #1 coming to stores everywhere February 2012! Witchblade/Red Sonja is written by Doug Wagner and drawn by Cezar Razek, with covers by Alé Garza! In issue #1, Red Sonja, the She-Devil with a Sword, pursues a cannibalistic monstrosity into the heart of a dead, black mountain. Meanwhile, Sara Pezzini, modern day bearer of the Witchblade and NYPD Detective, investigates the ghastly death of a Catholic Priest.

"Let's get this out of the way right now, this is NOT your typical crossover," says writer Doug Wagner. "There's no time traveling, no merging of universes, no soul swapping, and no messages in a bottle. The first issue won't have the two heroes fighting against each other until they figure out who the real villain is. If that's what you're here for, you've come to the wrong place. WitchBlade/Red Sonja #1 is the beginning of a grisly trial for both characters. Red Sonja and Sara Pezzini are about to plummet into despair and hopelessness, both physically and emotionally. Their beliefs and courage will be tested, and it will take more than just either heroine brandishing their fabled weapons to overcome this threat. Humanity as they know it is at risk. And if one fails, they both fail."

"Doug and Dynamite have really gone to great lengths to create an exciting, unique cross-over event between two of the most recognizable female leads in comics," adds Top Cow Publisher Filip Sablik. "It would have been easy to come up with some contrived way for these two heroines to meet, but Doug has crafted a story that remains true and taps into the rich mythos of both properties. I'm excited to read it!"

Red Sonja, the She-Devil with a Sword, has been an incredible success under the stewardship Dynamite Entertainment! Red Sonja is a fictional character, a high fantasy sword and sorcery heroine created by Roy Thomas and Barry Windsor-Smith, and loosely based on Red Sonya of Rogatino in Robert E. Howard's 1934 short story "The Shadow of the Vulture". She first appeared in the Marvel Comics book Conan the Barbarian #23 (February 1973). Red Sonja has become the archetypical example of the fantasy figure of a fierce and stunningly beautiful female barbarian who typically wears armor resembling a bikini or lingerie.

Witchblade is an American comic book series published by Top Cow Productions, an imprint of Image Comics, from 1995 until present. The series was created by Top Cow founder Marc Silvestri, editor David Wohl, writer Brian Haberlin, and artist Michael Turner. The series follows New York City Police Detective Sara Pezzini, who is the bearer of the Witchblade, a mysterious artifact that takes the form of a deadly and powerful gauntlet. The Witchblade has been worn my countless women over the ages, including historic figures such as Cleopatra and Joan of Arc. Sara must try to control the Witchblade and learn its secrets, even as she investigates the city's strangest, most supernatural crimes.

Doug Wagner is a writer based in Atlanta, Georgia, He got his start writing ULTRAFORCE for Malibu Comics and has worked for Image, DC/Wildstorm, Dark horse and 12 gauge comics.

Originally seen at http://robojapan.blogspot.com/2011/11/witchblade-red-sonja-cross-over-coming.html and http://www.comicbookresources.com/?page=article&id=35383

Posted by Timothy S. Brannan at 4:40 AM No comments: