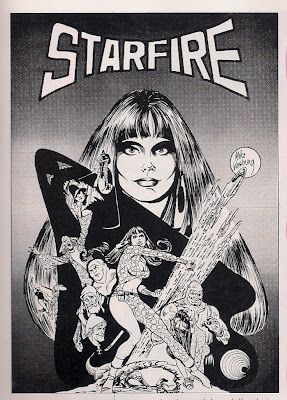 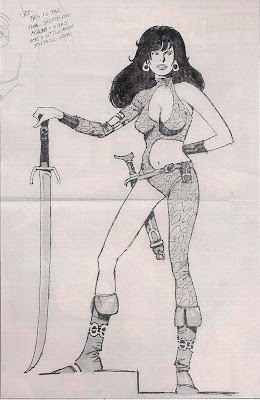 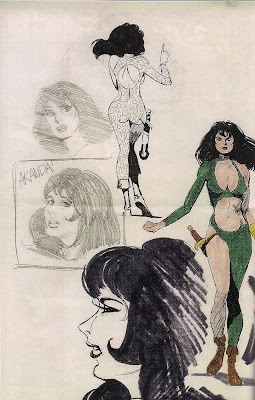 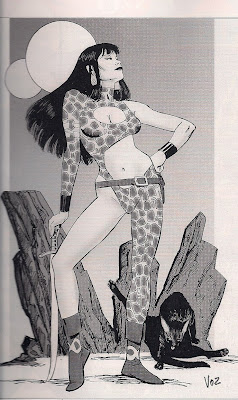 In the newest issue of Back issue magazine by Two Morrows ( Number 54 the one with the Bruce Timm BIG BARDA cover ) There is a way cool article on the creation of the character STARFIRE. The article has interview segments with Mike Vosburg and Dave Michelinie , Elliot S. Maggin , Steve Englehart and Tom Defalco ( A one time Big Wig at Marvel Comics ) It goes on to tell us the origins and ideas for the character in that she was created to be the direct answer to Marvel comics' RED SONJA...but the guys on this book just did not want to use the same premise but wanted to add a new flare and flavor. So they created a Burrough's type John Carter kind of world for STARFIRE to have her adventures in.


Starfire's name was originally supposed to be AKANDA but they went with a more commercial catchy name instead....The costume was also a product of Mike Vosburg's inspirations in European art and cartooning. Her outfit with the off the shoulder breast bearing cut out asymmetrical design and look of both Wally Wood's Power girl and Guido Crepax's Valentina. There were also designs and characters inspired by the likes of Moebius and Maroto as well as Paul Gillon and Victor De la Fuente and others in the European world of cartoonists. I'd like to share some of the cool commissions and sketches of Mike Vosburgs provided along with the article. I have always been a big fan of Back issue magazine and Roy Thomas and sincerely recommend you go on out and pick yourself up a copy of Back issue 54...not just for the cool STARFIRE article but there are also pieces on BIG BARDA , SHE HULK , VALKYRIE , MS. MARVEL and the PHEONIX! It's thier "Liberated Ladies" issue. Pick it up , read it LOVE IT! I guarantee you will.

p.s. folks....I'm going to take about a one month break from blogging but feel free to visit and comment...I'll be poking my nose in from time to time. PEACE OUT CUB SCOUTS! 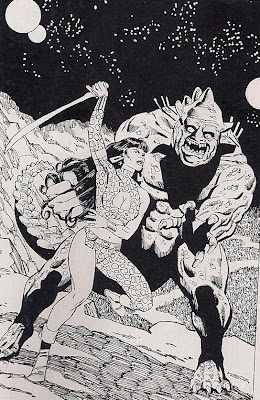 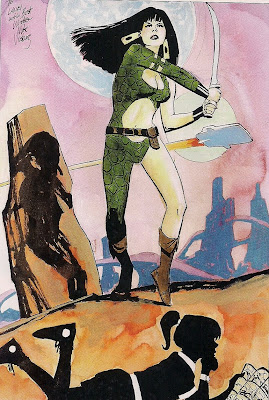 Thanks to Tim from I'd Rather Be Killing Monster for this.

Email ThisBlogThis!Share to TwitterShare to FacebookShare to Pinterest
Labels: statue

Red Sonja collage....see if you can name all the artists? 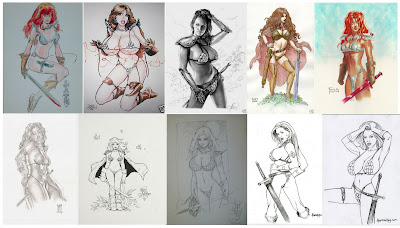