Red Sonja: Birth of the She Devil: Lucio Parrillo 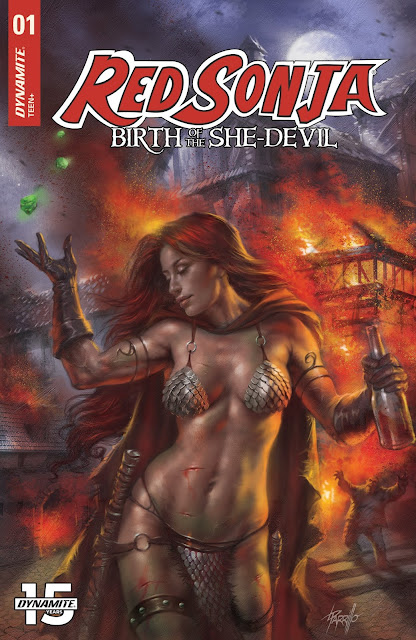 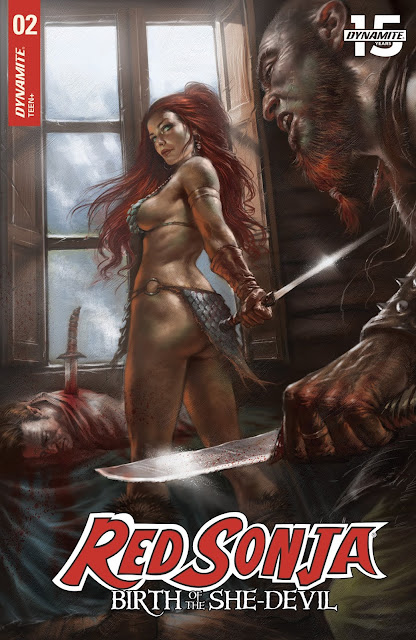 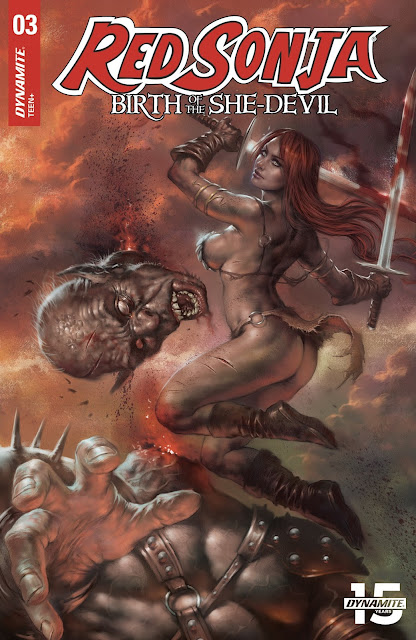 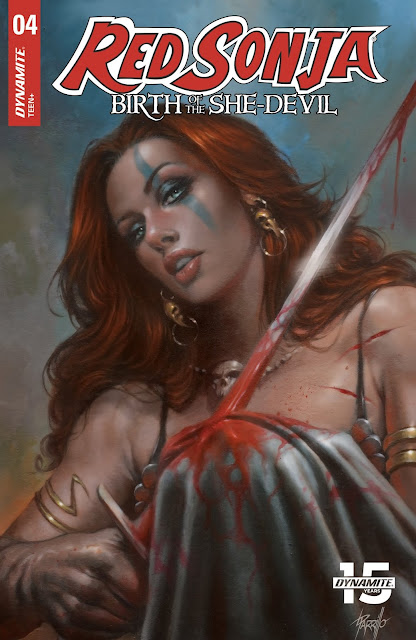 They’re strangely (and almost certainly involuntarily) complementary to the Parel variants. Where those covers were peacefull, almost restfull, with only traces of blood telling about violent combat, this set by Parrillo is full of violent action, battlelust, blood and gore. Parrillo’s Sonja is the full-bodied buxom warrior we all know and love, and his style perfectly evokes the classic Marvel covers by Joe Jusko and Boris Vallejo. By looking at them one never doubts that Sonja could fight an army on that metal bikini, and the sword cuts on her body fully attest to it. Parrillo also chose to emphasize the barbarian nature of Sonja (particularly in the cover for #4), what with all the skull necklace, heavy earrings and tribal face-paint.  It is a magnificent set, marred only by Sonja’s pin-up expression on the cover for #3.

Dynamite offered another set of variant covers by Sergio Dávila that, at least to me, look perfectly indifferent, and yet another (again, to my taste) perfectly irrelevant set of cosplay covers.


Well, it surely must be old news by now, but SubaComic also offered variant covers for issues #2, #3, and #4 of last year’s mini-series RED SONJA: BIRTH OF THE SHE-DEVIL; however, for completism sake, here they are. 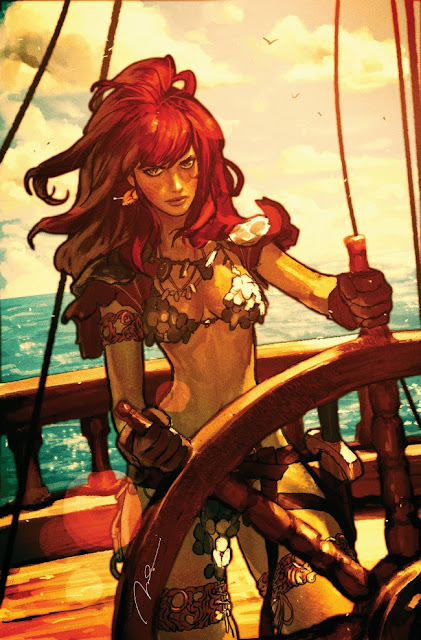 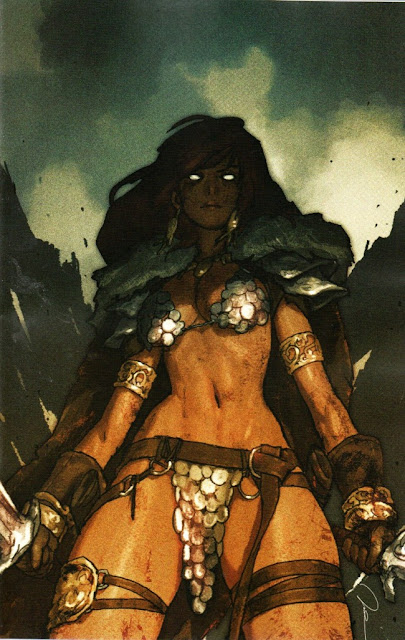 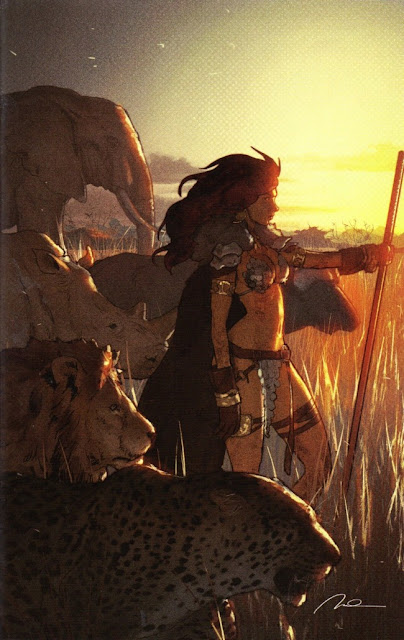 Just as it was the case with issue #1, these variants are by French artist Gerald Parel, whose covers are pretty well known by Marvel readers. His take on Red Sonja is quite interesting, presenting us a more elfin she-devil, not as well-endowed or muscular as one would expect, but lithe and elegant as a feline. The use of color and light is quite striking, particularly in issue #2. As a set, the four covers present a quite bucolic, almost pastoral, interpretation of Sonja, as if Parel is more interested in the inner-state of the warrior right before or after moments of violence, than in the fight itself, thus relegating violence to a necessity, rather than a taste, in Sonja’s life. Be as it may, these covers make for interesting comparison to the main covers for the series by Lucio Parrillo.

KILLING WHO, THAT IS NOT YET DEAD? 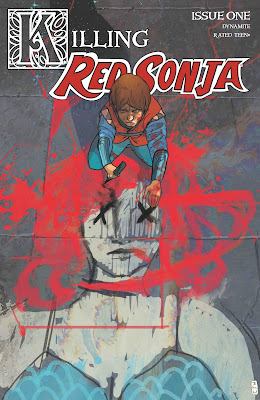 I should be the one to talk, dragging behind me a host of perpetualy moribund blogs, but…truth is, it pains me to see this blog of ours being quiescent for so long. So, taking advantage of the recent publication of issue one of KILLING RED SONJA (written by Mark Russell and Bryce Ingman, with pencils by Craig Rousseau), I felt tempted to share this very short rant that was inspired by my perusing of said title, as a way to try to bring myself to contribute a little more to this blog from now on. Though time for me has been in very short supply for this past few years, it pains me to leave so much of my pleasure projects unfinished. And the Red Sonja Chronological Retrospective is one of them, one I’ll try to come back to, soon. Anyhow, here we go:

KILLING RED SONJA was advertised, just like SWORDS OF SORROW (2016) before it, as being a series “that will affect the Sonja series for years to come!”, and, just like SWORDS OF SORROW before it, it probably will do no such thing. But this kind of recurring editorial hype made me think of the recent iterations of Red Sonja. Now, I have yet to read KILLING RED SONJA #1, as per the book’s own introduction we learn that “the events of this series take place directly after Red Sonja #12”, an issue (and a series – volume 5 of Dynamite’s run) that I also have not yet read (although I know Sonja is – again – Queen and apparently facing some demanding ethical choices). So, I intend to read the fourteen issues published until now before tackling this latest series; but one thing that struck me by merely browsing the book, was that Red Sonja appears only in its title. There’s nothing wrong with that – quite the contrary as, if well written, a story that revolves around Sonja, without she figuring in it but by influence – and a central motivational influence at that – can do much to illuminate and redefine the absent character. Redefine it in the reader’s mind, leading one to evaluate one’s personal connection and reaction to it. 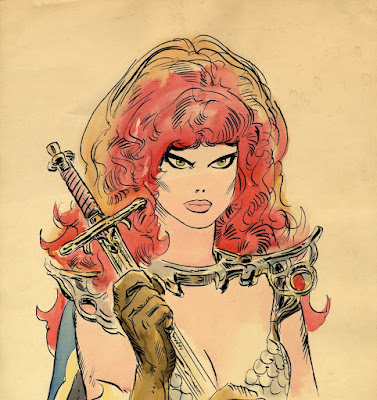 But, alas, that, at least to me, is the main problem with the concept: who is Red Sonja? Who is she really, for today’s reader? During her period at Marvel in the seventies and up to the mid-eighties of last century, and despite its highs and lows, Sonja was a recognizable character, thanks in large part to Roy Thomas’s writing. However, since being delt a cleansing ideological washover by Gail Simone, one can’t seem to fix a single identitary mark on our beloved Hyrkanian. Worse than that, Red Sonja seems nowadays to be just a trademark to be prostituted to any prospective market (that is, as long as such market conforms its trade to a prefixed normative ideological trench – and, remember, art in service to ideology is mere propaganda). And the first victim to this was any semblance of chronological timeframe. Sonja is all over time and all over space; she goes from mercenary to queen, to drunkard, to truck driver in New York, vampire hunter in Riverdale, turist in Drakulon, again queen, again mercenary, a prospective mate for Tarzan in Africa, a fugitive on Mars, without any of her experiences ever reflecting on her character.

When Roy Thomas, by reader demand, casted Conan into the 20th Century in WHAT IF…? #13 (1978), the whole story was told through the eyes of an out-of-place, out-of-time barbarian, that saw all the modern contrivances (cars, buildings, even people) with his own time’s mindframe. A mantle of what we would think of as superstitious thought covered our reality when seen with Conan’s eyes. It was nothing new, utopian writers had been doing it since Antiquity, and modern writers at least since Tomas Morus, but it was done right. Conan wasn’t even capable of comunication, as his language was long dead and he knew no English, and the idea of setting the climax at the inverted zigurath shape of the Guggenheim was true storytelling gold. 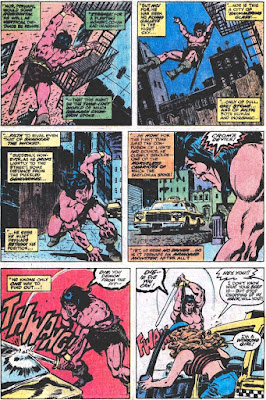 Being a kind of alternate tale, Thomas didn’t have to deal with how Conan woud have coped once back to his own Hyborean Age. But he didn’t need to. His story was so soundly logic, its treatment so right, that we readers could intelectually antecipate how Conan would frame that experience along those he had had before dealing with wizardry and magic. He wouldn’t have to mentally cope with concepts like future societies, democracy, technological advance, ecology, etc…

That is not an escape Sonja’s recent scribes can count on. Sonja always appears immersed on alien societies (sometimes literallly alien): she shares the language, she shares the uses, she shares the mores; she’s as adroit riding a horse as a Harley and, one would think, as adroit fighting street-gangs as doing cheerleading routines. She goes to outer space without ever grasping the meaning and import of that apparently simple feat, so familiar to SF readers before 1961 and Gagarin, but so epic and glorious for all others. And, an even worse offense, she has no trouble integrating her worldview into modern times or alien places. Above all, she seems untouched by any of her experiences. When she finds herself back on her own time, all of that has disappeared from her personal experience. As if her mind has been swiped clean with a magical sponge, the reverts back to an ersatz barbarian immediately after she has returned from a long stint on New York, Riverdale, or whatever Fantasyland or Planet she happens to have been transported to. 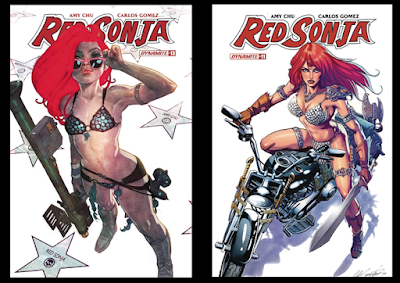 Nothing seems to have touched her. She learned nothing. She doesn’t even think of adding something to her world, to her time. Sonja seems to be imutable, and that is a sad thing in any character, but a fatal flaw when said character is no more than an empty shell from the start. Gone is the determined, fierce, scathing Sonja of Thomas and Thorne. What remains is a fanfiction creation, with such a lack of character density that she fits any and every story one cares to think up. Hey, one can imagine someone say in creative meetings on Dynamite’s offices, what if somehow Sonja was transported to Tatoine by some evil wizard – why not Kulan Gath, we haven’t seen him for...what?, two, three issues?.. – and she ends up on the Death Star fighting with her sword against Vader’s lightsaber? Or better yet…with her own lightsaber? And what about she and Leia ending up on the clutches of Jabba? Wow, man, great idea. Is Amy Chu around? And, if Disney is okay with that, it will be done, without caring for the nature of Red Sonja herself, or the demands of her character.

Ironically, in devoiding Sonja of a full personality (distinct from that of her successive writers), one subject only to the concerns of the story, and reducing her to a maleable form, capable of adapting into any kind of narrative story, it becomes impossible to write a story that will “affect the Sonja series for year to come”. For Sonja has nothing that can be affected. She is just a shape, just a form. She is now paradoxically reduced to what she was always derided for apparently being: a pair of tits in a metal bikini. 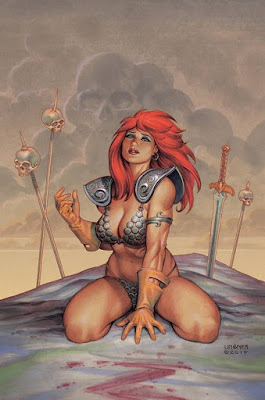