Queen Sonja vs The Army of Darkness

I never quite got around to mentioning issue #5 of Queen Sonja when it came out a few weeks ago, and then issue #6 came out and I still failed to mention Queen Sonja. I figured Mikey would beat me to it, but it looks like I get to comment on both issues! Sweet!

So let's start with Queen Sonja issue #5, or what I like to call Queen Sonja vs The Army of Darkness. This series is moving 1,000 mph and not slowing down to let anyone know why there's an army of undead dudes fresh off the set of Army of Darkness or even who these hotties Sonja has surrounded herself with are (I know who they are in general, but there's almost no character development - even with Sonja - in this series).

Queen Sonja issue #6 slows down a little bit. There's still a lot happening with very little backstory being revealed, but this issue does develop Sonja's character as a ruler straining under the burden of command and chafing at the male-dominated kingdom she has apparently assumed rule over (I still don't quite understand how she got there). Even Mels Rubi's art in this issue seems more impressive to me (the following are some of my favorite panels). You can actually see some emotion on Sonja's face (it's funny that Sonja's companion - to her right - in the first and second panels of the first image doesn't change at all from panel to panel, though).

Despite my mixed feelings for the story and the interior art (I'm really not a huge fan of Mel Rubi's work) , Lucillo Parrilo's covers continue to impress me. I can't remember a Red Sonja series with such consistently amazing cover art. 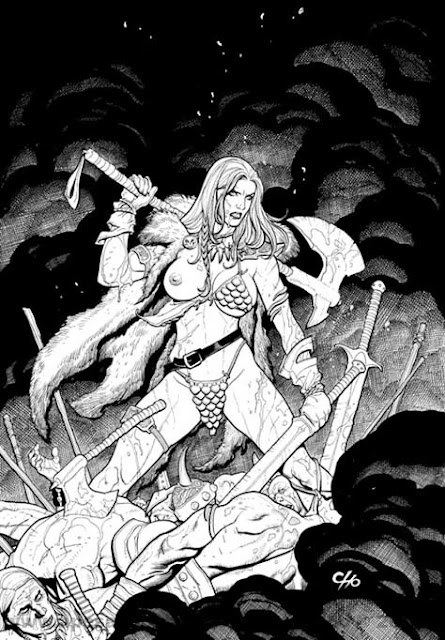 Looks like Sonja is having a wardrobe malfunction...nice illo.
Posted by Mike D. at 2:17 AM 2 comments:

I don't usually pay much attention to the free issues of Comic Shop News at my local comic shop, but it quickly grabbed my attention this week when I spotted Joe Linsner's rendition of Sonja on the cover. The issue features an article all about the upcoming landmark (for current indy titles, anyway) 50th issue of Red Sonja. I figure the series is way past 50 already if you count all the other Sonja titles out there like Savage Tales, the Spider-man/Red Sonja crossover, Queen Sonja, the Red Sonja/Claw crossover, Red Sonja Vs Thulsa Doom, etc. By my count, there are already about 90 Dynamite-published Sonja issues.

So, back to the article.

The Comic Shop news article talks about contributors to the upcoming issue (there are quite a few new faces) and some of the basic plot outlines for the stories. There are four covers for the issue and I will be picking up each of them. They're all beautiful.

Even our good friend Joe Jusko is doing one of them. And it's amazing.

One of the stories is such a Conan rip-off that it's comical. It's basically Sonja vs the Frost Giants. Wow. If I was a Howard purist, I'd be pissed. But as a Howard fan who doesn't mind seeing other characters visit Howard's universe, I'm psyched.

The Comic Book Resource web site also has an article talking about the upcoming issue. And its images from the issue are much better quality than the news print scans I did from the Comic Shop News.


Here's an advertisement showing the Turner statue and the art book with the Silvestri cover that's mentioned in the Comic Shop News article. 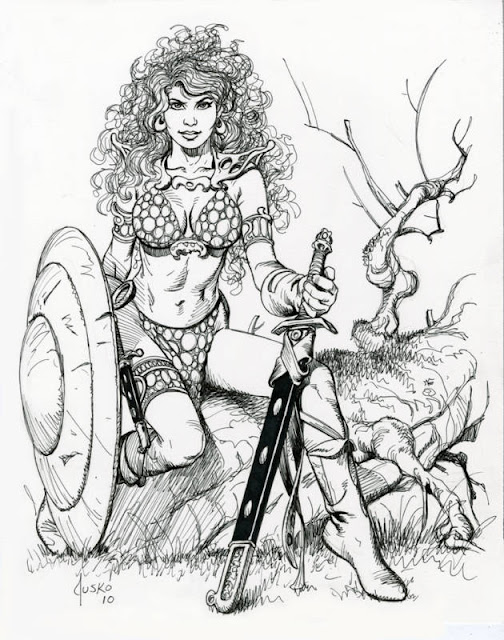 A convention drawing.  Some lucky art afficianado is gonna own this soon.  Too bad it will not be me.
Posted by Mike D. at 2:45 AM 4 comments:

I'm beginning to wonder if the film will ever be released

I was picking up my weekly fix of comics (no new Sonja or Conan books this week) at the local comic shop yesterday and heard some surprising Red Sonja news from one of my fellow comic-nerds: Rose McGowan is apparently out of Red Sonja.

I really don't think McGowan's recasting is a huge loss. Rose is attractive and probably would have played an okay Sonja (certainly better than the manly Brigitte), but is just a little too scrawny for Sonja. But - after my fellow nerd made us unsuccessfully guess who her replacement was for about five minutes - the actress reported to have been offered the role is just wrong. All wrong.

Seriously? Sure, she's got the Sonja curves, but even with the best wig or dye job, she's just doesn't visually look like a Red Sonja to me (although the visual comparison above makes a good case). And don't get me started on the one-dimensional, apathetic flatness of her "acting."