A wish that may be coming back to haunt me 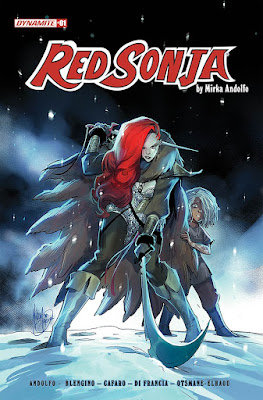 Back in 2016, while reviewing the dismal SWORDS OF SORROW event, I expressed the wish that Italian artist Mirka Andolfo could one day secure at leat a six-issues run on RED SONJA: SHE-DEVIL WITH A SWORD after Simone had left the title. Or, at least, a couple of one-shots.

Well, that wish will be granted coming September when the first issue of Dynamite’s volume 6 of Sonja’s continuing run hits the stands. However, I must say I receive this news with mixed feelings. What had engraciated myself to Andolfo was her artwork on SWORDS OF SORROW: RED SONJA & JUNGLE GIRL, something that apparently will be confined to the book’s variant covers in this upcoming run, with the art duties falling upon Giuseppe Cafaro, an Italian artist whith whose work I’m not at all familiar (he’s done some work with Guilherme Balbi in SACRED SIX #4, and got credited as Guiseppe Cafro). And, although I’ve enjoyed reading MERCY and UN/SACRED, that is not the kind of writing I would expect for a Sonja book.

Moreover, it seems Dynamite invited Andolfo to create her own version of Red Sonja which, as good as it may yet prove to be, is one version too many, after the SONJAVERSAL overdose of regurgitated pseudo-Sonjas. What one would expect now was for Dynamite to settle on a version of Sonja – really, any one version – and start exploring all the nuances that made her what she is. And create stories that explore what what she is makes her do. Not to keep re-imagining a character that bares only the minimum of resemblance to Howard’s or Thomas’ creation. Adding insult to injury, I don’t in the least appreciate the new look of Sonja, as per Andolfo’s issue 1 cover (above). Although I do very much appreciate the old look on Andolfo’s virgin incentive variant cover (below). 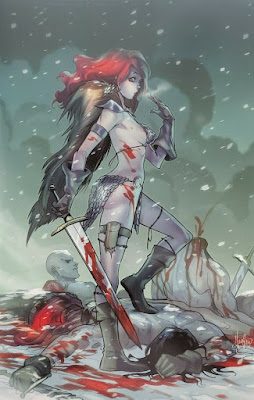 Last, and maybe not leastly, the idea of exploring Sonja’s maternal side doesn’t bid anything good, and brings to mind Fleischer’s RED SONJA (1985). Although I feel it tackles what is perhaps the least interesting aspect of the Sonja character – maternity, or adopted maternity – I recognize that, if done well, one can derive from it a rich vein for new and complex stories. However Andolfo would have to be able to completely avoid comparisons with Kazuo Koike’s manga LONE WOLF AND CUB (1970-1976), that by now is an instantly recognizable classic of the genre. Which seems to be a rather tall order. But enough carping before the fact. I wished for it (more or less) and will now anxiously await to see what it delivers.
Posted by A. Sherman Barros at 6:35 PM 1 comment: 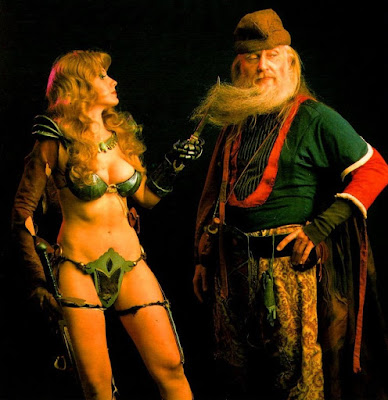 Frank Thorne passed away this last March the 7th, a passing barely mentioned amidst the daily death tolls of the pandemic. It was a shock to find about it here, in this blog of ours, the sad notice glimpsed on the sidebar from another blog. I wanted to write something about him. Not quite an obituary, as I dread them more and more; nor an eulogy, something more personal than I felt entitled to; and definitely not an essay, as cold and pedantic as it would be unworthy of all the pleasure and enjoyment his ouevre has brought me all through the years. And so I kept it all to myself, the memories of my favourite stories, of those happy moments of my life when I was holding his books on my hands, immersed on those fabulous worlds that he was generous enough to share with us. Because, in the end, that’s all it ammounts to: not the speeches, the great hommages, the knowledgeable  essays, but the way one becomes part of the life and memories of another. And Thorne, mainly through his art on the Red Sonja stories, long before I found, and read, and loved LANN, and GHITTA, and THE IRON DEVIL, became part of me. Even before I knew his name was Frank Thorne, before I’d even glimpsed his glorious photographs dressed as the wizard Thenef with his buxom models. His art gave me pleasure. It became part of me.

And so the world moves on, life moves on, slightly different because his art made it so. Different. Somehow, better. There’s no more you can ask for.

So, I said it. It just felt wrong to return to this blog without thanking him for all the happy hours of reading and dreaming, and partaking of his wild wild world. Rest in peace, sage Wizard.

Posted by A. Sherman Barros at 9:19 PM No comments: